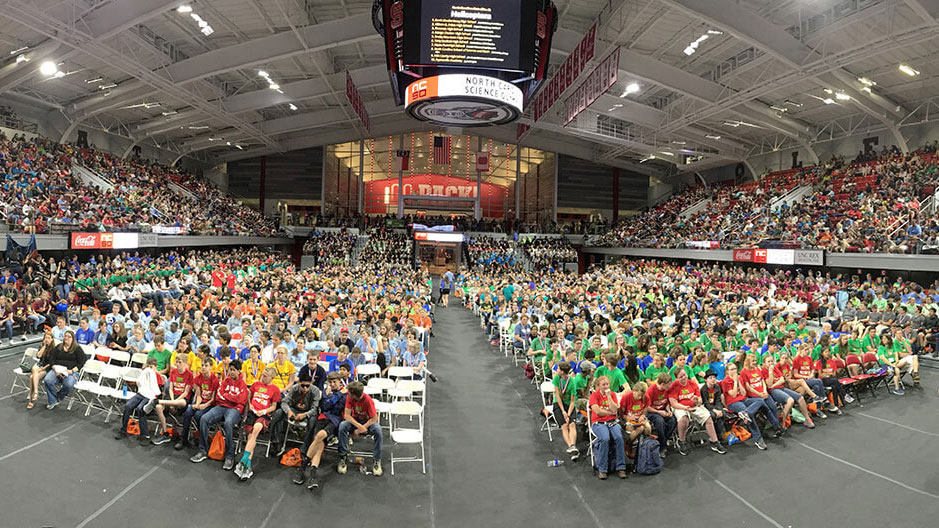 NCSO is the largest K-12 STEM competition in North Carolina and the largest Science Olympiad program in the country.

North Carolina Science Olympiad (NCSO) is a NC State program with mission to attract and retain the pool of K-12 students entering science, technology, engineering, and mathematics (STEM) degrees and careers in North Carolina. Every year NCSO hosts tournaments on university, community college, and public school campuses across the state. These tournaments are rigorous academic interscholastic competitions that consist of a series of different hands-on, interactive, challenging and inquiry-based events that are well balanced between the various disciplines of biology, earth science, environmental science, chemistry, physics, engineering and technology.

In 2019, more than 900 K-12 teams representing over 18,000 students and 75 counties in North Carolina participated in NCSO activities. NCSO is indebted to the thousands of volunteers that donate their time each year to making our activities a success.

The challenging and self-motivating events of NCSO align with the North Carolina Standard Course of Study as well as the National Science Education Standards. The events are designed to enhance and strengthen both science content and process skills.

The first recorded Science Olympiad was held on Saturday, November 23, 1974 at St. Andrews Presbyterian College in Laurinburg, North Carolina. Dr. Donald Barnes and Dr. David Wetmore were the originators of this event. Fifteen schools from North and South Carolina participated in this event. This Olympiad was a day-long affair, with competitions and demonstrations for high school students in the areas of biology, chemistry, and physics. There were four event periods during this day, and each event period had one fun event (like beaker race or paper airplane), one demonstration (like glassblowing and holography), and one serious event (like periodic table quiz or Science Bowl). A wonderful article by David Wetmore was published in the Journal of Chemical Education in January of 1978 documenting the success of recruiting students through Science Olympiad. St. Andrews continues to host a Science Olympiad tournament to this day.

Mr. John C. “Jack” Cairns was a teacher at Dover High School in Delaware in the 1970s when he learned learned about Science Olympiad taking place in North Carolina. He shared this information with Dr. Douglas R. Macbeth, the Delaware State Science Supervisor. Mr. Cairns was appointed to a steering committee to organize the first Olympiad in Delaware which took place at Delaware State College in the Spring of 1977.

By 1982, word about Science Olympiad continued to spread, and caught the attention of Dr. Gerard Putz in Macomb County, Michigan. Dr. Putz invited Mr. Cairns to share the success of the Delaware Science Olympiad with Macomb County. As a result, Michigan hosted their first two tournaments in 1983 and 1984 while at the same time Delaware hosted eight similar tournaments. Dr. Putz and Mr. Cairns then decided to share the program with the rest of the Nation. The rest is history.